Robotics is an interdisciplinary branch of engineering and science that includes mechanical engineering, electronic engineering, information engineering, computer science, and others. Robotics deals with the design, construction, operation, and use of robots, as well as computer systems for their control, sensory feedback, and information processing. 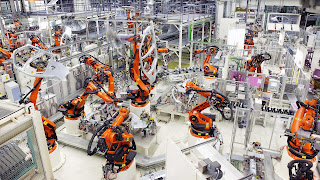 These technologies are used to develop machines that can substitute for humans and replicate human actions. Robots can be used in many situations and for lots of purposes, but today many are used in dangerous environments (including bomb detection and deactivation), manufacturing processes, or where humans cannot survive (e.g. in space, under water, in high heat, and clean up and containment of hazardous materials and radiation). Robots can take on any form but some are made to resemble humans in appearance. This is said to help in the acceptance of a robot in certain replicative behaviors usually performed by people. Such robots attempt to replicate walking, lifting, speech, cognition, or any other human activity. Many of today's robots are inspired by nature, contributing to the field of bio-inspired robotics.

The concept of creating machines that can operate autonomously dates back to classical times, but research into the functionality and potential uses of robots did not grow substantially until the 20th century. Throughout history, it has been frequently assumed by various scholars, inventors, engineers, and technicians that robots will one day be able to mimic human behavior and manage tasks in a human-like fashion. Today, robotics is a rapidly growing field, as technological advances continue; researching, designing, and building new robots serve various practical purposes, whether domestically, commercially, or militarily. Many robots are built to do jobs that are hazardous to people, such as defusing bombs, finding survivors in unstable ruins, and exploring mines and shipwrecks. Robotics is also used in STEM (science, technology, engineering, and mathematics) as a teaching aid.The advent of nanorobots, microscopic robots that can be injected into the human body, could revolutionize medicine and human health.

Robotics is a branch of engineering that involves the conception, design, manufacture, and operation of robots. This field overlaps with electronics, computer science, artificial intelligence, mechatronics, nanotechnology and bioengineering.

At present, mostly (lead–acid) batteries are used as a power source. Many different types of batteries can be used as a power source for robots. They range from lead–acid batteries, which are safe and have relatively long shelf lives but are rather heavy compared to silver–cadmium batteries that are much smaller in volume and are currently much more expensive. Designing a battery-powered robot needs to take into account factors such as safety, cycle lifetime and weight. Generators, often some type of internal combustion engine, can also be used. However, such designs are often mechanically complex and need a fuel, require heat dissipation and are relatively heavy. A tether connecting the robot to a power supply would remove the power supply from the robot entirely. This has the advantage of saving weight and space by moving all power generation and storage components elsewhere. However, this design does come with the drawback of constantly having a cable connected to the robot, which can be difficult to manage.[34] Potential power sources could be: 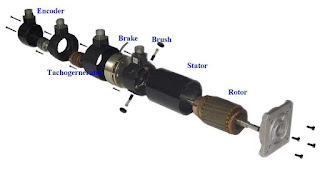 Actuators are the "muscles" of a robot, the parts which convert stored energy into movement. By far the most popular actuators are electric motors that rotate a wheel or gear, and linear actuators that control industrial robots in factories. There are some recent advances in alternative types of actuators, powered by electricity, chemicals, or compressed air. 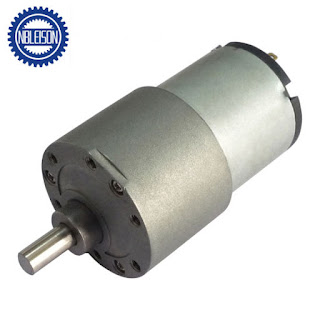 The vast majority of robots use electric motors, often brushed and brushless DC motors in portable robots or AC motors in industrial robots and CNC machines. These motors are often preferred in systems with lighter loads, and where the predominant form of motion is rotational. 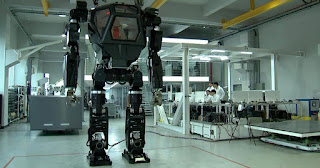 Various types of linear actuators move in and out instead of by spinning, and often have quicker direction changes, particularly when very large forces are needed such as with industrial robotics. They are typically powered by compressed and oxidized air (pneumatic actuator) or an oil (hydraulic actuator) Linear actuators can also be powered by electricity which usually consists of a motor and a leadscrew. Another common type is a mechanical linear actuator that is turned by hand, such as a rack and pinion on a car.

Series elastic actuators
A flexure is designed as part of the motor actuator, to improve safety and provide robust force control, energy efficiency, shock absorption (mechanical filtering) while reducing excessive wear on the transmission and other mechanical components. The resultant lower reflected inertia can improve safety when a robot is interacting with humans or during collisions. It has been used in various robots, particularly advanced manufacturing robots  and walking humanoid robots. 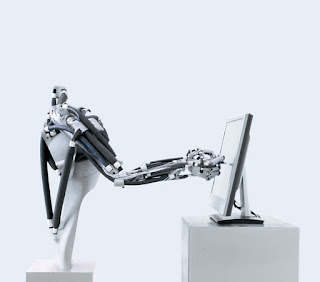 Pneumatic artificial muscles, also known as air muscles, are special tubes that expand(typically up to 40%) when air is forced inside them. They are used in some robot applications.

EAPs or EPAMs are a plastic material that can contract substantially (up to 380% activation strain) from electricity, and have been used in facial muscles and arms of humanoid robots, and to enable new robots to float,fly, swim or walk.


Recent alternatives to DC motors are piezo motors or ultrasonic motors. These work on a fundamentally different principle, whereby tiny piezoceramic elements, vibrating many thousands of times per second, cause linear or rotary motion. There are different mechanisms of operation; one type uses the vibration of the piezo elements to step the motor in a circle or a straight line. Another type uses the piezo elements to cause a nut to vibrate or to drive a screw. The advantages of these motors are nanometer resolution, speed, and available force for their size.These motors are already available commercially, and being used on some robots.

Elastic nanotubes are a promising artificial muscle technology in early-stage experimental development. The absence of defects in carbon nanotubes enables these filaments to deform elastically by several percent, with energy storage levels of perhaps 10 J/cm3 for metal nanotubes. Human biceps could be replaced with an 8 mm diameter wire of this material. Such compact "muscle" might allow future robots to outrun and outjump humans. 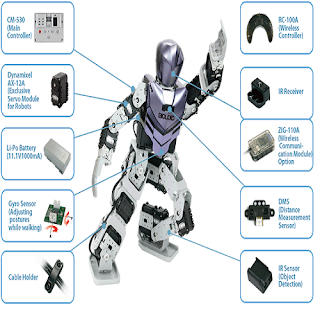 Sensors allow robots to receive information about a certain measurement of the environment, or internal components. This is essential for robots to perform their tasks, and act upon any changes in the environment to calculate the appropriate response. They are used for various forms of measurements, to give the robots warnings about safety or malfunctions, and to provide real-time information of the task it is performing.

Current robotic and prosthetic hands receive far less tactile information than the human hand. Recent research has developed a tactile sensor array that mimics the mechanical properties and touch receptors of human fingertips.The sensor array is constructed as a rigid core surrounded by conductive fluid contained by an elastomeric skin. Electrodes are mounted on the surface of the rigid core and are connected to an impedance-measuring device within the core. When the artificial skin touches an object the fluid path around the electrodes is deformed, producing impedance changes that map the forces received from the object. The researchers expect that an important function of such artificial fingertips will be adjusting robotic grip on held objects.

Scientists from several European countries and Israel developed a prosthetic hand in 2009, called SmartHand, which functions like a real one—allowing patients to write with it, type on a keyboard, play piano and perform other fine movements. The prosthesis has sensors which enable the patient to sense real feeling in its fingertips.

Computer vision is the science and technology of machines that see. As a scientific discipline, computer vision is concerned with the theory behind artificial systems that extract information from images. The image data can take many forms, such as video sequences and views from cameras. 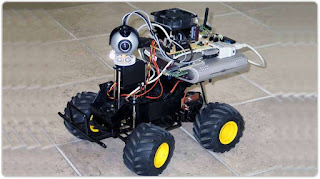 In most practical computer vision applications, the computers are pre-programmed to solve a particular task, but methods based on learning are now becoming increasingly common.

Computer vision systems rely on image sensors which detect electromagnetic radiation which is typically in the form of either visible light or infra-red light. The sensors are designed using solid-state physics. The process by which light propagates and reflects off surfaces is explained using optics. Sophisticated image sensors even require quantum mechanics to provide a complete understanding of the image formation process. Robots can also be equipped with multiple vision sensors to be better able to compute the sense of depth in the environment. Like human eyes, robots' "eyes" must also be able to focus on a particular area of interest, and also adjust to variations in light intensities. 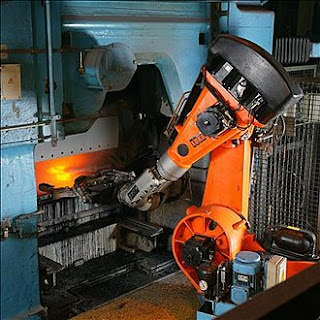 Robots need to manipulate objects; pick up, modify, destroy, or otherwise have an effect. Thus the "hands" of a robot are often referred to as end effectors, while the "arm" is referred to as a manipulator.Most robot arms have replaceable effectors, each allowing them to perform some small range of tasks. Some have a fixed manipulator which cannot be replaced, while a few have one very general purpose manipulator, for example, a humanoid hand.

Mechanical grippers
One of the most common effectors is the gripper. In its simplest manifestation, it consists of just two fingers which can open and close to pick up and let go of a range of small objects. Fingers can for example, be made of a chain with a metal wire run through it.Hands that resemble and work more like a human hand include the Shadow Hand and the Robonaut hand.Hands that are of a mid-level complexity include the Delft hand.Mechanical grippers can come in various types, including friction and encompassing jaws. Friction jaws use all the force of the gripper to hold the object in place using friction. Encompassing jaws cradle the object in place, using less friction.

Pick and place robots for electronic components and for large objects like car windscreens, often use very simple vacuum grippers.
General purpose effectors
Some advanced robots are beginning to use fully humanoid hands, like the Shadow Hand, MANUS, and the Schunk hand.These are highly dexterous manipulators, with as many as 20 degrees of freedom and hundreds of tactile sensor 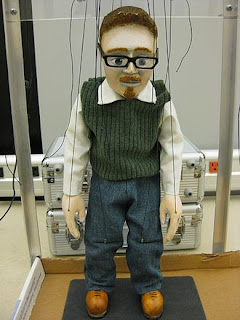 The mechanical structure of a robot must be controlled to perform tasks. The control of a robot involves three distinct phases – perception, processing, and action (robotic paradigms). Sensors give information about the environment or the robot itself (e.g. the position of its joints or its end effector). This information is then processed to be stored or transmitted and to calculate the appropriate signals to the actuators (motors) which move the mechanical.

The processing phase can range in complexity. At a reactive level, it may translate raw sensor information directly into actuator commands. Sensor fusion may first be used to estimate parameters of interest (e.g. the position of the robot's gripper) from noisy sensor data. An immediate task (such as moving the gripper in a certain direction) is inferred from these estimates. Techniques from control theory convert the task into commands that drive the actuators.

At longer time scales or with more sophisticated tasks, the robot may need to build and reason with a "cognitive" model. Cognitive models try to represent the robot, the world, and how they interact. Pattern recognition and computer vision can be used to track objects. Mapping techniques can be used to build maps of the world. Finally, motion planning and other artificial intelligence techniques may be used to figure out how to act. For example, a planner may figure out how to achieve a task without hitting obstacles, falling over, etc.